Once again the Harvest moon caught me by surprise. It doesn't feel like October at all, although the cold front we are expecting next week will help with that. For the past three years we have celebrated the appearance of the beautiful Harvest Moon.

I wrote this story for Grace when she was five years old. The Harvest Moon was early then, just like this year.

Once upon a time, there were three little fairies. They lived with their family underneath a mushroom cap, in an enchanted garden. They loved to play in the dark, after the humans went to bed. They bounced on spider webs, slid down fern leaves and hid among the snapdragons.

One night, something so mysterious appeared in the night sky, it made their wings tremble. The fairies spoke in hushed whispers, "It's huge! It's so orange!" Their parents told them it was the Harvest Moon, there to announce the harvest season. It was time to celebrate the charms of Autumn once again. 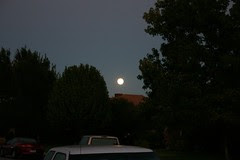 But instead of being happy, their parents were worried. "It has come too early this year. We haven't had any time to prepare for the upcoming winter."

There would be no playing that night, and the fairy children were whisked off to bed. As the mommy fairy tucked them in, they shivered, for the leaf blankets were still on the trees. One tiny tear fell down the cheek of the littlest fairy. "What shall we eat for breakfast? she asked. Their acorn baskets were empty and they had no seeds hidden away. "Shhh...go to sleep little one," her mommy whispered.

The Harvest Moon rose high in the sky and suddenly quiet giggles could be heard throughout the garden. All of the fairies were fast asleep, except for the little one, peeking through the ivy. She wondered what the humans were doing. They appeared to be leaping from one end of the garden to the other, reaching down around the garden paths. 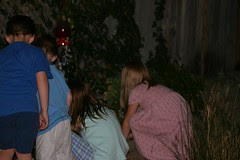 Their shadows disappeared as quickly as they had come and the small fairy slowly tiptoed out of her hiding place. She looked around and found herself surrounded by soft leaves, acorns, pinecones and dried flowers. 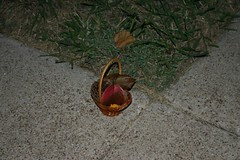 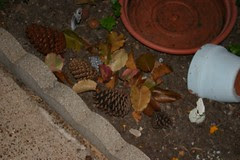 She cried out with joy! How lovely of the human children to rememember their fairy friends during their own Harvest Moon celebration!

The fairy skipped back to bed and snuggled up between her brother and sister. The moon may have come too early, but she couldn't wait to tell her family they would have a harvest celebration afterall! 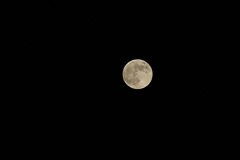 What a wonderful story. I will share it with Chloe. Have a fun weekend Clarice

Oh how precious, Kelli! You need to be working on that book;)

I LOVE that story! LOVE IT, LOVE it! I am a bit obsessed with the enchanted world~faeries and sprites, knomes and such. What a sweet story!

Thank you for stopping by my blog. You really made my day when you said 'photographer' for I only WISH I could be considered one! I do hope you stop by again!

I am very impressed with the Little House experiment you did. That sounds like a challenge but such a FUN way to learn! Great job!

Wonderful story, Kelli!!! How precious that they leave acorns and pine cones for the little fairies. :)

What a special treasure this story is for all of you!

You know...I'm an adult and I enjoyed your story very much...you have such a talent. Hope to hear something more too ...perhaps a Halloween story this month?...have you seen Daisy Lupins blog? Have a look http://catsinthekitchenflorainthegarden.blogspot.com/ you have to participate!

Isabella in the 21st Century said...

What a lovely story. I look forward to a beautiful harvest moon every year!

What a lovely story, I'm going to print it and save it until Kaitlyn is old enough for me to read it to her. The illustrations made it even better.The Harvest Moon is beautiful isn't it? I was trying to take photos last night but they aren't brilliant. Going to read the manual on night photography and try again tonight if the cloud clears.

A cute little story Kelli. I don't know how you come up with all these things but I'm so glad!

Oh Kelli, what a delightful story...you know how much I love faeries and to read such a story had me picturing it all:-) I would have loved to hear such a story when I was a child!! Loved the pictures too!! Hugs xox

What a wonderful and well illustrated story! I loved the children and the gifts of leaves and pine cones!!

That is such a wonderful story Kelli, I'm going to print it and read it to my daughter :)

Thanks for sharing :)
Hugs,
Sandra

Loved your story! That's one thing I don't feel I do well is make up stories. I can read them with accents, different voices, and a great deal of flourish, but making them up for me is like pulling teeth. Okay... maybe not THAT bad, but you get the picture. :)