For our Praire Adventure, I cooked out of my Little House Cookbook. Most of the recipes were so good, I'll be making them again!

Our main beverage was coffee, made from a french press.

Add coffee grounds into the glass container. Add hot water, let sit for a few minutes and then slowly press down a metal disk that separates the grounds from the water. Very simple and it made the best cup of coffee I've ever had! 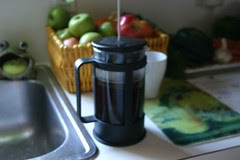 I don't have pictures for all the food we ate but it included oatmeal, pancakes, baked beans, bread, mashed potatoes, roasted hens, and apple pie.


For breakfast there were pancakes, and Ma made a pancake man for each one of the children. Ma called each one in turn to bring her plate, and each could stand by the stove and watch, while with the spoonful of batter Ma put on the arms and the legs and the head. It was exciting to watch her turn the whole little man over, quickly and carefully, on a hot griddle. When it was done, she put it smoking hot on the plate. -Little House in the Big Woods 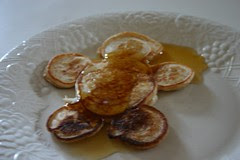 The bread-sponge was lifting the lid of the pan. Ma hurriedly floured the breadboard, and kneaded the dough. Then she got dinner. She was putting the pan of light biscuits in the oven when Pa came driving the wagon up the hill. Behind him, the wagon box was piled high with willow brush that he had brought for summer fuel, for there were no real trees at Lake Henry. -By the Shores of Silver Lake Laura always wondered why bread made of corn meal was called johnny-cake. It wasn't cake. Ma didn't know, unless the Northern soldiers called it johnny-cake because the people in the South, where they fought, ate so much of it. They called the Southern soldiers Johnny Rebs. Maybe, they called the Southern bread, cake just for fun. Ma had heard some say it should be called journey-cake. She didn't know. It wouldn't be very good bread to take on a journey.
-Little House in the Big Woods 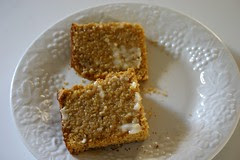 Slices of salt pork were frying, and Mrs. Brewster was slicing cold boiled potatoes into another frying pan on the stove. Johnny fussed in the bedroom, and Laura quickly pinned her braids, tied on her apron, and said, "Let me fix the potatoes while you dress him." So while Mrs. Brewster brought Johnny to the stove and made him ready for breakfast, Laura finished slicing the potatoes, and salted and peppered and covered them. Then she turned the slices of meat and set the table neatly. -These Happy Golden Years 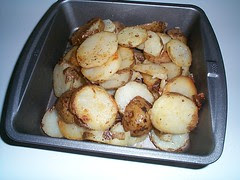 At noontime everyone was allowed to move about the schoolroom and talk quietly. Eliza Jane opened the dinner-pail on her desk. It held bread-and-butter and sausage, doughnuts and apples, and four delicious apple-turnovers, their plump crusts filled with melting slices of apple and spicy brown juice. After Almanzo had eaten every crumb of his turnover and licked his fingers, he took a drink of water from the pail with a dipper in it, on a bench in the corner. Then he put on his cap and coat and mittens and went out to play. -Farmer Boy 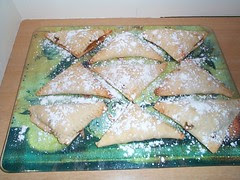 As you can see, we certainly didn't starve out there on the Prairie!!
Posted by Kelli at 7:23 AM

If you say I inspire you well YOU inspire me with all these treats you are posting!The coffee pot I love I am purchasing one to use for my loose herbal tea..it really does bring out the best flavor!Hold on Kelli soon I'll be posting something you and your girls will LOVE!hugs NG

That's so much fun! I love seeing the pictures - but I know that there's no way that I would be anywhere near hard-working enough to make it as a pioneer mama!
Maybe I'll make my kids pancake men tomorrow, though!

The food looks so yummy. French press coffee is the best! I used to live in Seattle and my job was loosely connected with Starbucks. That's how they made coffee at their main headquarters when they did coffee tastings.

I had to laugh at your "they certainly didn't starve on the prairie" comment as I remembered "Farmer Boy" and all the food that family ate each day. I need to work like that so I can eat apple pie and donuts for breakfast, lol!

Everything looks so good !
I use a french press all the time. Matter of fact I threw out my automatic coffee maker. Just like the coffee better in the press. I do have a perculator and I like that too.

I love reading about your adventures with Little House on the Prairie. I bought 25 VHS tapes a while back and we have enjoyed them so much! Thanks for stopping by my blog!

Absolutely yummy! Everything looks so wonderful. Especially the turnovers. :)

It looks like you had a feast on the prarie and every thing you made looks so good. I have been away for a few days so I will have to go back and find out how the prarie days turned out.

You're making me hungry...

No wonder you were exhausted! :) The food looks terrific, though.

Your days sound like they were extremely enlightening. I imagine you and your family will keep these memories for a lifetime. What a gift to your children - even if the boys weren't thrilled. :)

Kelli, I have really enjoyed hearing about all the adventures you had "out on the prairie" LOL Your prairie food looks absolutely delicious. What a wonderful experience you gave your family:)

i loved your photos. it was my understand that journey cakes were fried corn bread and was given that name in the early days because this was the bread made by a camp fire. i have heard it called johnny cakes . i wonder if this comes from johnny apple seed. he travels all over this country during the early days and planted apples trees alomg the way.

Wow the food you ate all looked so delicious! I loved reading the snippets from the House on the Prairie book...you and your family will have so many wonderful memories of this experience:-)

Kelli, it all looks delicious!!!

(( Kelli)) I am so proud of you. I have been fascinated reading about your pioneer days. Good for you. you know there is not right or wrong way to do this and just think of the memories you will have. I have been talking with Chloe about what you did. We want to do it but we will do a much more modified version. I am getting to old for this stuff !!
xoxo Clarice

This is so neat. My kids and I just started the very first Little house book so I have to use some of these ideas if that is ok. Thanks for posting this.

I am compelled to buy this book and get these recipes!