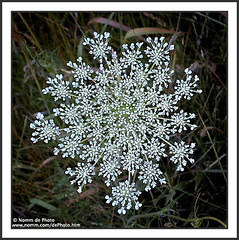 Queen Anne's Lace
Originally uploaded by pwinn.
Queen Anne's Lace, also called "Wild Carrot," is a common plant in dry fields, ditches, and open areas. It was introducd from Europe, and the carrots that we eat today were once cultivated from this plant.
It is best known for its flowers, were are tiny and white, blooming in lacey, flat topped clusters. Each little flower has a dark purplish center.

Queen Anne’s Lace is said to have been named after Queen Anne of England, an expert lace maker. English legend tells us that Queen Anne challenged the ladies of the court to a contest to see who could produce a pattern of lace as lovely as the flower of this plant. No one could rival the queen's handiwork. She however, pricked her finger with a needle and a single drop of blood fell into the lace, that is said to be the dark purple floret in the center of the flower. 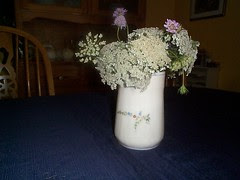 Queen Anne, Queen Anne, has washed her lace
(She chose a summer's day)
And hung it in a grassy place
To whiten, if it may.

Queen Anne, Queen Anne, has left it there,
And slept the dewy night;
Then waked, to find the sunshine fair,
And all the meadows white.

Queen Anne, Queen Anne, is dead and gone
(She died a summer's day),
But left her lace to whiten in
Each weed-entangled way!

Do you have any Queen Anne's Lace growing in your neighborhood?
Posted by Kelli at 11:58 AM

Kelli, I love the photos and information on 'Queen Anne's Lace'. We have a lot of it here too. The poem was lovely! Thanks for posting this.
Hugs, Flora

I never noticed it until I went to the Smokey Mountains one year. It was really pretty there. We have it here but it is puney & faded looking. I think it is too hot for it to be pretty here. I wish it looked like it did in the mountains!!!